On the longest day of this year, in our backyard, I had the most fun I’ve ever had; I jumped over a fire with Bill Norris, and now we’re married! 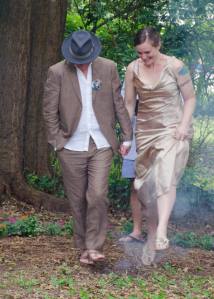 The official portmanteau of the wedding was “matyardmony.” Whee! So I cannot believe it took me until this morning to wonder what on earth the historical sense relationship was between “matrimony” (which I know as “marriage”) and “patrimony,” (which I know as “heritage,” connected to land and food and somehow France), but here we are. Obviously “mother” something and “father” something, but what and why?!

So: okay! Those same things I knew, plus Pope Joan. It’s bonkers to me that these don’t reference each other and explain what the deal is, but 1934 was a crazy time.

I poked around elsewhere (outside Webster’s Int’l–can you imagine?) and found this:

That’s better. I don’t think we’ll adopt Roman patriarchal family roles, but other things further down on this page sound fun, like “a special [Latin] verb that means to spend immoderately on eating: helluor.” Click here to read more. Another teaser: Seneca calling out “the kitchen” as a “disgraceful destroyer of patrimonia.”

So, that’s that! Best day ever.

Oh, you! Did you think I’d leave you hanging on the “Pope Joan” business?

The New York Times ran an odd article a while back about what long-term unmarried partners call each other, including this quote from one such person on the very state of being unmarried:

Ms. Linder said, “It’s the last stage of connection to rebellion, punk rock, countercultural — all those pieces of my youth.”

I liked that as a reason not to marry: staying punk rock! But I am so bananas delighted to be married to Bill Norris, AND…if “matrimony” refers to “Pope Joan” and “Pope Joan” refers to Joan Jett (which, duh), then I think lexicographically speaking I get to be matrimonied and eat all the punk rock cake, too.