I will acknowledge this: I know how to buy a watermelon. Last night, Bill had somewhere fancy to be for work, and since I like going fancy places and I couldn’t come to this one, and since we also really needed chicken food, the right thing to do was clearly go out, do errands, and infuse them with some light joy, i.e. selecting a watermelon.

(Did you know there’s a whole world of watermelon carving? This is adorable, but nothing compared to what you’ll see here.)

The watermelon ark was my first stop at the grocery store, the melons in their big square home like balls in a play pit for giants. I approached with my cart, and because the top layer was low, I angled my head a couple of feet down to the likeliest-looking one and gave a knock-knock-knock, listening for the deep reverberation answering “Yes. I am the delicious one.” There’s a wide range of acceptable sonority, and this first one fell within it, so as I straightened up from my knocking I brought the melon with me, and heard an equally sonorant laugh from the left. “I thought I was the only one who knew that trick!” This came from a open-faced man in his early twenties in a Kroger apron, pushing a cart of broccoli wherever it needed to go. I said “Yes! It’s very important!” and we smiled and he kept going.

I was so happy! I thought about what word I would put to the buzzy feeing; I thought about this because lately I’ve been thinking about “approval”–how, when, and why it’s needed, what effects that need can have. This buzz was not that buzz, the approval buzz being actually more of a quieting, a silencing of the baby bird peep-peeping for a regurgitated worm.  The word that came first was “affirmed”: I felt myself and my way of being, my way of watermelonning, affirmed by this laughing young man. In the kitchen later, cutting off the hat of the watermelon to put in a big bowl and eat with a spoon, I wondered if “acknowledged” was more accurate. These three words have the same structure, a common one:  [A] (latin, “to”) + [verb], with the consonant doubled (basically), such that “prove” would bear a similar relationship to “approve” as “firm” does to “affirm” and “acknowledge” to “knowledge.”  These are used with some fluidity out in the world;  I want to know whether the roots of these a-verbs can help do useful distinguishing here (cf. how people like Brené Brown advocate that we get clear on the shades of meaning distinguishing “shame” from “guilt” from “embarrassment” from “humiliation” so we can figure out what’s happening to us and what that means).

So!  The 1934 Websters International perspective, in working-theory-descending-order of need for regurgitated worms: 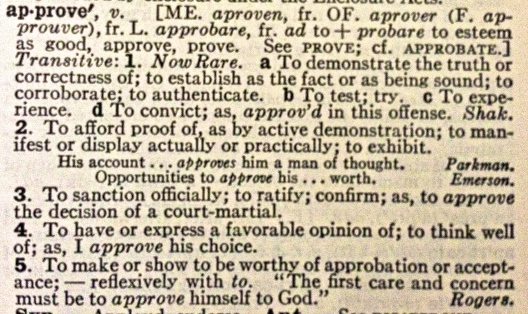 Definitions 3, 4, and 5 correspond to how we often use this–official sanction, favorable opinion. I am interested in the now-rare 1 and still-used 2, and the connection to the probare root, and this shade of not just “esteem” but “authenticate,” because all smushed together this captures a way we use “approval.” Approval says:”I establish the soundness of this; the soundness doesn’t exist apart from this establishment.”

If I don’t get a regurgitated worm, I am not rightly a bird.

Affirmation says: “I agree with the soundness; the soundness does not depend on my agreement.” I may or may not be hungry, but I will take a regurgitated worm, because why not? Delicious. 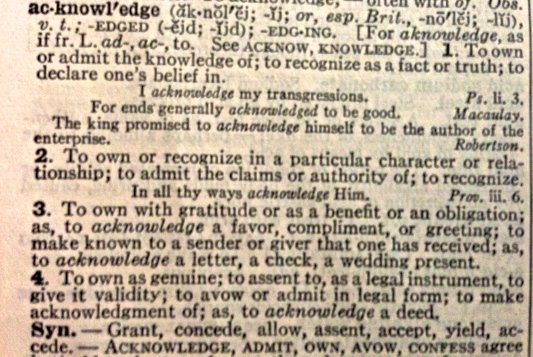 Acknowledgement says: “I see and know the soundness; the soundness does not depend on my seeing it and knowing it.” Oh, thanks! As it happens, I regurgitate my own worms.

I called that working-theory descending order, and I will own that I decided to go ahead and pick out what confirmed it, because what I really want is something I can use in the world to describe for myself what’s going on. You can approve, affirm, or acknowledge all that as it suits you! As for the watermelon man, I think now that there was both affirmation and acknowledgement happening; really parsing what he said, I think he felt affirmed, and that spilled out in a laugh and an affirming acknowledgement: “Yes! I see you, and I agree, and I feel something in me agreed with too.” He thought he was the only one, but he wasn’t, and sometimes that’s enough to make us laugh, right in the produce section.