I started thinking about continents and continence and then I couldn’t hold myself back!

Because I’d just never pondered the relationship between “contintent,” like landmass, and “contain,” but surely there was one. And then there’s that other “continent”–the one that crops up in Shakespeare in a way that’s confusing and exciting for the 7th graders reading “The Taming of The Shrew,” and also as a less exciting variation in commercials for adult diapers. I believe it was the unpleasantness of considering a future self in need of those that heretofore prevented me from deep consideration of how all the “continent”s might fit together, but I am 35 now, and the benefits of aging currently so far outweigh the drawbacks that I am able to countenance even incontinence.

So: to the 1934 Webster’s International, to see what we can see.

Much to enjoy here! Let’s start by noting that the way most of us currently use “continent,” as in one of seven major blocks of land, appears last in this set, after all the all business about not indulging one’s intemperate desires. Woven throughout these many entries is a palpable connection to Latin continere, listed here as applying in situations of both containing and repressing. So: yes! A continent is so because it’s a discrete(ish), contained(ish) block of land; and to be continent is to hold it in, if that’s your pee, your virtue, whatevs. My hypothesis before reading this matched 1934 reality regarding the landmasses, but also incorrectly assumed physicality for the chastity too, as in, “to be continent” is not to keep abstract virtue in through maintenance of a resolute psychological border, but to keep literal penises out though whatever borders were required, psychological or otherwise. This comes from my perception that this “chaste” usage generally occurs in reference to women, because god forbid, etc etc. As I look over the other definitions, I do have dim memories of seeing the word refer to men who manage not to drink and screw themselves to death in Wilde, Austen, etc, but it’s been a while. I am curious as to whether y’all (Erin Forbes) have a sense of usage in literature connected to race, gender, or class, so pipe up if so.

So yes, let’s get to incontinence!

Ok, love this in so many ways. Incontinent of SECRETS! Even knowing as I do that it means restraint in such a general way, all I can think is what a beautiful metaphor it is: someone peeing out a secret they just couldn’t hold. Also, in 1934 you couldn’t even say “urination and defecation.”

A few stray definitions to address: The last “incontinent” just above: “Immediate.” With the rare or obsolete definitions, you generally don’t get the etymological lineage in quite the same way, and sometimes that’s fun too, because you get to play “WHY??” My guess is that this usage broadens the notion of “holding (back)” beyond the scope of the individual, such that it can apply to events or phenomena that just can’t be stopped. “Continent,”way above, noun, def 3: “That which is the seat or the external representative of something, or represents the totality of a complex being.” Holy cannoli, people. I would really like an example of this…this usage of “continent,” certainly, but also this whatever that is able to represent the totality of a complex being! If you know wtf this is talking about, I hope you will tell me.

Finally, we’re at the part where I get to make up a word, or at least repurpose one. There are noun forms of “continent” and “incontinent” referring (respectively if not respectfully) to someone who does or doesn’t “hold it in” in the way society thinks they should. Since as we just learned there is also a noun form of “continent” meaning “that which represents the totality of a complex being” but NOT a noun form of “incontinent” meaning the opposite, “a representation failing to capture the totality of a complex being,” that is my made-up usage of the day, and it just so happens I have an illustration, literally, taken from my very first mini sketchnoting lesson. 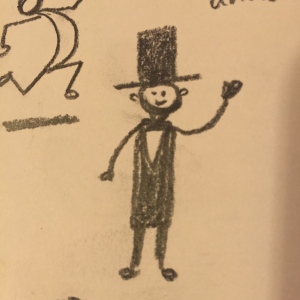 “a representation failing to capture the totality of a complex being,”