Wouldn’t that be incredible?

After adventuring in Webster’s 1934 International, I can report that this is an apt analogy…in the sense that the “:”, the “is to,” stands in for “has no etymological connection whatsoever.” Awwwwww. I wanted one!

But instead, here’s the deal: 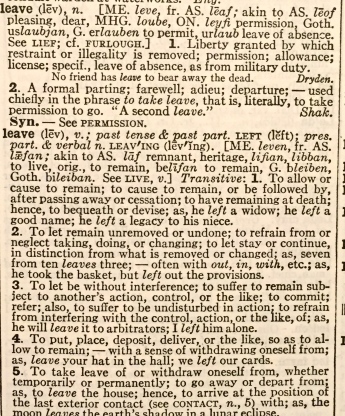 “Heave,” from/related to “seizing” and “handling,” and related to… every word in English, apparently. 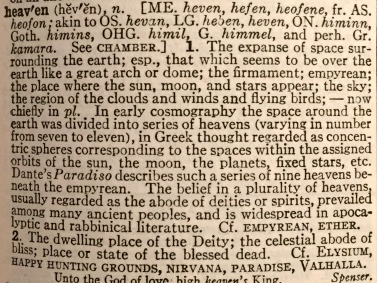 And finally, “heaven,” “akin to” all kinds of things in all kinds of languages but seemingly not from a damn thing. Heaven stands alone, all seven to eleven of it.

I love all this, because what?! A set of six letters ending in a suffixy letter like “n,” looking so patterned, and then the no-“n” version has nothing whatever to do with the -n version! Oh, English. If I was a(n) historical linguist for real, I could probably explain the whole business by saying “Great Vowel Shift!” and then some other things, but as it is, I am content to marvel. And to note with joy that “heave” and “leaven” are actually the most morphemically (meaning-ly) related of the four, according to current usage (“lift”-ish), and then both of those connect, in a more figurative way, to “heaven” (in the “up” sense, not the “expanse of space” sense). Rad, right? Only poor “leave” is left out, and I can permit that.

So…yes. In a way that stretches the definition and usefulness of analogy, “leave : leaven :: heave : heaven”…but then it also has to be true that “heave : heaven :: matzo : mozzarella,” or  “:: skyr : skycake!” I.e:  “no dang relation at all, but so fun to think about.”

Ok, that’s enough from me… Talking Heads, take us on up.