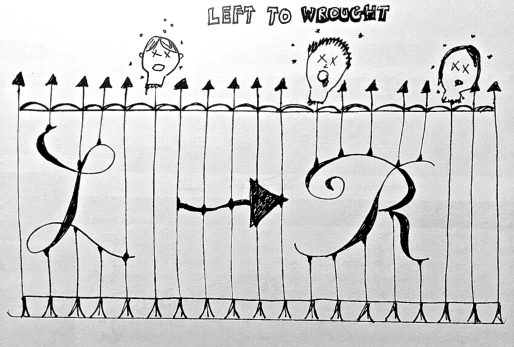 Again: NO! Nope nope nope. Not “wring,” “wrink,” “wruy,”… nothing at all that you could work out from English as a system.

It’s “work”ed! Past tense and past participle, so once you could say “I wrought the heck out of that iron” as well as “that iron had the heck wrought out of it.” And by 1934, pretty much just the “hence: adj.” So, fine, makes sense. Two things stand out: 1) in all the examples of “-wrought” as a combining form, one of these things is not like the other, and 2) whoa… obsolete past tense of what?

Totally a whole verb, noun, related adjective, and then verb again from that adjective. And isn’t this an awesome word? Heed, care, estimate, transitive or intransitive! And of course: “reckon” and “reckless.” “What recks it them?” indeed! And way back when, you used to be able to use “reckless” as a verb. “Nah, let’s not clean the neck off the wrought iron, we’ll just reckless it for the nonce.” As far as “wrought” for past tense, this just ignores the whole matter–of the matter it recks not— and instead shows “recked” and “raught” and “roughte” and what have you.

So with this “care”-ful definition in mind, let’s go back to “-wrought” as in “-worked.” Hard-wrought, hammer-wrought, machine-wrought, thin-wrought…sure! I picture a person and a thing–a smith and a horseshoe, a tapester and a tapestry. But “overwrought” we now use in a different way, to mean “beside oneself, and kind of a mess.” So when you look it up…

…it throws out another “hence, adj.” (yes, with a comma instead of a colon this time, and I am surprised and delighted by these little occasional reminders that it was just people, people without computers, who hard-wrought this whole dictionary) … so, “overdone” in a showy way, like some tapester thinks he’s the shit and embroiders this way too elaborate over-the-top hunting-picnic scene, and then also to mean “all in a fit,” as in “wrought upon excessively… by life” (instead of by a craftsperson). But listen: if “wrought” is the past tense of “reck” and “reck” means “to care a bunch,” then over-wrought could be over-cared instead of over-worked, and it would actually make total sense!*

It’s not true though I don’t think…it looks like “rought(e)” is really more the past of “reck,” maybe once upon a time conflated with “wrought” in some confused, reckless way. But I can cling to my little theory if I want…they don’t put heads on spikes for that much anymore.

*I checked on whether “reck” and “reach” have a common ancestor leading to their past tense forms lining up, and, nope. It does, however, connect to German “reichen” and that’s creepy-feeling.