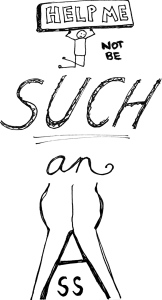 This week, I was in New York City, which is a great source of all kinds of help in anyone’s quest, whether it’s to be not such an Ass or to be the hugest Ass one is capable of being. I got lots of the first kind of help from Shyla and Aurora and Aisha, who shepherded me through the days there with love and silliness.

Here’s some of what else I turned to this week:

A piece by Sandra Guzman on nbcnews.com and a WNYC radio interview (with Guzman and others) on racism within the Latino community, both responding to Rodner Figueroa’s firing from Univision. For my WaHi/WHEELS friends: the radio interview touches on racial tensions between the Dominican and Haitian communities. Also: the first caller aired on the show was a white man. I went to a marchfor Michael Brown on the UWG campus this fall, and at the end of our walking, the student leaders opened up the megaphone to anyone who had something they needed to say. There was a beat between the invitation to talk and the first hand up, and that first hand up belonged to the only white male in the group of at least 100, and he spoke about twice as long as anyone who followed.

The language-inflected and social-memory focused art of Matthew Buckingham. I especially like Canal Street Canal. (Thanks, Erin J.)

The Heroine’s Bookshelf by Erin Blakemore, my former co-copy editor at San Diego School of Creative and Performing Arts’ newspaper “The Production.” Erin looks at the traits of a heroine through the lens of literary women and their creatrices. Here’s a taste: (on “steadfastness” via Jane Eyre) “Tellingly, it is a journey Jane must make alone. All the brooding lovers and abusive teachers in England couldn’t teach Jane as much about herself or her core values as a few days wandering the moors, looking for salvation, and searching for the next right step. Though she would be content to fall into the moors and become a part of the outdoors, she does not die. She stands up, moves forward, and asks for help.”

I read “Fresh Off the Boat” by Eddie Huang, and it fills me with contradictory thoughts, which is usually a good sign. It’s a sharp (both pointed and apt) critique of the “model minority” narrative of Asian-Americans; he also employs disturbing words for and about women; he also talks knowingly and lovingly about reading Audre Lorde and about winning Women’s Studies awards in college. I can’t sort it all out. I’m glad I read it.

Do you need language for what’s wrong with the OU frat boys’ apologies? Briallen Hopper has it, spot on (Thanks, Erin F.).

Also, I was pointed to June Jordan’s “Poem About My Rights“ in October of this year, and I have turned to it a few times since (Thanks, Erin F.).

That’s it for this week. If you have suggestions for not being such an Ass, I’ll always take them.