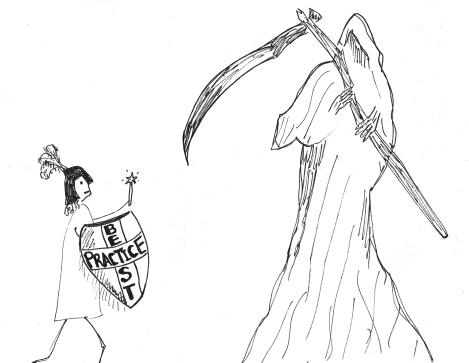 A month or so ago, I picked up “Switch,” by the Heaths. This seemed like a book I should read, because the year before I was hired everyone I work with read it, and we all talk about riders and elephants all the time. Also, it was very highly recommended by a person outside of work whose sensibilities I trust 100%. And in the first 25 pages I had a surprising experience: it drove me fucking crazy and I had to put it down.

My revulsion had, I think, very little to do with the book itself, or rather with the specific content of the book–it had to do with the genre. I read, appalled, about The Three New Things to Think About Before Ever Doing Anything (or similar), and I thought: Ah: I am saturated. I am saturated with books whose sub-titles are all the same: “Here’s How to Do It Perfectly (So You Will Never Have to Die).”  Best Practice Makes Best Perfect! What Pittman McGehee calls “the American religion” raises us to be very hopeful that if we can just do the right thing the right way and be very very productive–best-practify our whole lives– we will reap the rewards: safety, freedom from pain and fear, via money or power or both. If we keep that up forever and are thus safe forever, we’ll never have to die. Yay!

I must stop and say I am pro best practice. Duh, it’s best practice. And when we learn about some kick-ass research-based strategies and tools, and we trust the research they are based on, of course!: we’ll try those new great things rather than clinging desperately to Traditional Methods for the sake of Methodical Tradition.  What revolted me instead is connected to the way that I have consumed these books in the past*–as the long-sought keys to Finally Doing Everything Right. If all the frameworks are Finally, Completely, Messianically All I Need To Know, then trying to juggle and multiple such frameworks=crazy-making nonsense.

I’m not sure why it was poor “Switch” that broke the elephant’s back–I still assume that what’s in it is valuable and when I get over myself, I will pick it up again. It may be having encountered the argument that perfectionism–which I’d historically understood to be unhelpful as a personality tendency–is associated with the culture of white supremacy, and so, sensing this book as a part of a slew to which I have brought that spirit as a reader, I was appalled–less by it than by what it pointed to about me and the culture that made me.

In “The Fire Next Time,” James Baldwin** puts it this way: Life is tragic simply because the earth turns and the sun inexorably rises and sets, and one day, for each of us, the sun will go down for the last, last time. Perhaps the whole root of our trouble, the human trouble, is that we will sacrifice all the beauty of our lives, will imprison ourselves in totems, taboos, crosses, blood sacrifices, staples, mosques, races, armies, flags, nations, in order to deny the fact of death, which is the only fact we have. It seems to me that one ought to rejoice in the fact of death—ought to decide, indeed, to earn one’s death by confronting with passion the conundrum of life. One is responsible to life: It is the small beacon in that terrifying darkness from which we come and to which we shall return. One must negotiate this passage as nobly as possible, for the sake of those who are coming after us. But white Americans do not believe in death, and this is why the darkness of my skin so intimidates them. And this is also why the presence of the Negro in this country can bring about its destruction. It is the responsibility of free men to trust and to celebrate what is constant—birth, struggle, and death are constant, and so is love, though we may not always think so—and to apprehend the nature of change, to be able and willing to change. I speak of change not on the surface but in the depths—change in the sense of renewal. But renewal becomes impossible if one supposes things to be constant that are not—safety, for example, or money, or power. One clings then to chimeras, by which one can only be betrayed, and the entire hope—the entire possibility—of freedom disappears.

This all makes me think also of the way Ellen Langer talks about process-orientation vs. outcome orientation, and potential limits to a process orientation. Or rather…if we so privilege process that “achieving the process” becomes itself an outcome, we aren’t actually still process-oriented. If we cling too tightly to process, we may also risk privileging intent over impact–if I feel my process was unassailable (I used all the boxes in the SWOT analysis!!), I may be less willing to look at what results with a reflective eye*** (for how this matters writ large, see Race Forward’s‘ racial discourse analysis or their video). I think what I mean is that perfectionism applied to process isn’t especially better than perfectionism applied to outcome; a concept that helps me here is “sufficiency” from the COS****–that we need just enough process to handle the complexity of the content we are actually working with; we need just enough ownership of and alignment around both the content and the process of the problem we’re solving, and we’ll know if we had enough by whether or not the problem is solved. This is so scary and awesome because it means you can’t know in advance that you’re doing the right thing the right way–picking up a bunch of awesome tools doesn’t actually count if they don’t end up solving the problem or enacting the possibility you were seeking, and I HATE THAT because I’d like to read the book and pick up the tools and know I’m never going to die, but…here we are. Here we are!

*The books are written this way; publishers need to sell books. People who have more ego strength than I do at 35 are certainly capable of reading these books as collections of helpful suggestions, and wielding the suggested tools lightly, elegantly, without the literal death-grip characteristic of perfectionism. Many people I know and work with do this very well, and I learn from them.

**in looking for this block quote so I didn’t have to type each word, I came upon a book which refers to this passage as an example of Baldwin’s “existentialist death-mongering,” and I laughed out loud.

***I’m a sucker for the idea of “doing our best,” except when it’s used to argue that some shitty outcome was inevitable and we don’t need to change anything. Carol, my chorus director, sometimes responds to grumbly nitpickings from one section or another (sopranos) with a gentle reminder that everyone is doing their best, and I love this so much. “Aristotle and Dante Discover the Secrets of the Universe” brings this up a lot too, and what makes these instances not cat poster-ish is that they treat “doing one’s best” as a constantly refreshed, iterative process–a conversation between intent and impact, so it doesn’t count if I “do my best” for 5 minutes or for one meeting where we decide how we’re going to increase inclusivity, and then I go have a sandwich. If I also apply the “doing my best” process to reflecting and adapting based on what I learn, then I have some hope for human development. Books like “Switch” do actually help when they gives us what we need to make our best slightly better, whatever that means for us at the time; they don’t help with human development when they imply a stopping point–a sandwich break– other than, you know, death.

****And, here I am recommending a framework. But, the COS knows we’re all going to die and doesn’t pretend otherwise, in fact doesn’t pretend anything, and so it helps people get things done in a way that grows those people individually and collectively.