The word “encounter”…well, I keep bumping into it.

It started on the Green River, with Camille Farrington. She offered us–the assembled, all connected to EL in one way or another–a framework to describe the developmental experiences through which children learn. It integrates both action and reflection*, and breaks each of those up into delicious component bites. I was particularly taken by the “action” verbs, and I made a little doodle (sitting in the sun by that same Green River) to help me remember them: 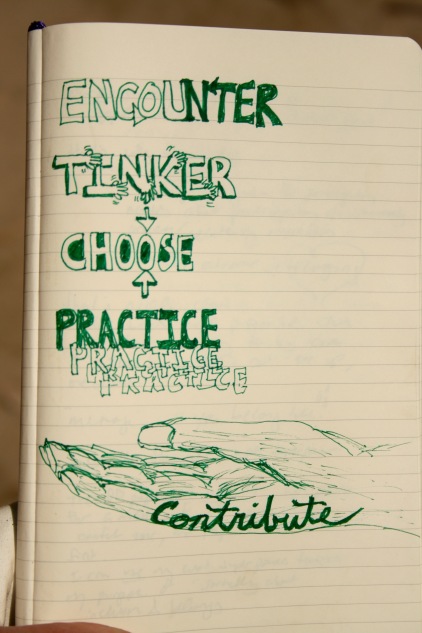 So, clearly, I’m thinking of “encounter” here as a coming-together from different directions. Maybe with a little bump as we run into each other, like the U and the N (not a United Nations joke).

Also, I’ve been reading an awesome book by Beverly Tatum, who is a psychologist and has been the President of Spelman for the last 10ish years: “Why Are All the Black Kids Sitting Together in the Cafeteria?… and Other Conversations About Race.” I’d known about this book and had been curious, but also confused by the title, which seemed to capture a question grounded in suspicion of something wrong with the Black kids sitting together in the cafeteria. And, it does capture that–why people who aren’t the Black kids themselves might think so, anyway–and is just beautiful about explaining why it may happen, contextualized in the development of racial identity…it’s a great book that I unhesitatingly recommend. She goes into the stages of racial identity development for people of color and for white people (with that as the division because given the nature of our particular racist society–namely, a system of advantage for white people–racial identity as a member of the systematically advantaged group is theorized differently than for those who are excluded from that group). And: the stages for people of color (she uses William Cross’ model): pre-encounter, encounter, immersion/emersion, internalization, internalization/commitment. For white people (she uses Janet Helms’ model): contact, disintegration, reintegration, pseudo-independent, immersion/emersion, and autonomy. I was struck by a) the echo of “encounter” and b) that there’s a stage called “encounter” in one model and a stage called “contact” in the other.**

I have a generally positive set of connotations for “encounter.” It sounds fun, and like a little adventure, like you happen upon something–“oh, hullo!”… maybe you have a technical shoes on, and then you step back a bit, and probably get to learn something. (One vigorous exception is that I also think of it as the title of a book for young people by Jane Yolen about the events surrounding Columbus’ landing on San Salvador, told from the perspective of a Taino boy.) “Contact” I think of as more intentional and physical–it’s not a happening-upon, it’s a reaching-towards-and-eventually-touching. So let’s go see:

Worth noting is that 1934 Webster’s Int’l is distinguished by its listing of earliest uses first, not more common uses first, so, sure, later it talks about “meeting” and so forth. But shit! This word comes from against-ness, from hostility. The Online Etymology Dictionary offers a follow-up: “Weakened sense of ‘meet casually or unexpectedly’ first recorded in English early 16c.” So that’s been around a while, but they too list the beginning as “c. 1300, ‘to meet as an adversary.’” Ugh! So if I wished to be true to this, I’d add some fists or angry eyebrows to my doodle. And Jane Yolen’s sure got the right verb or noun for her book title. 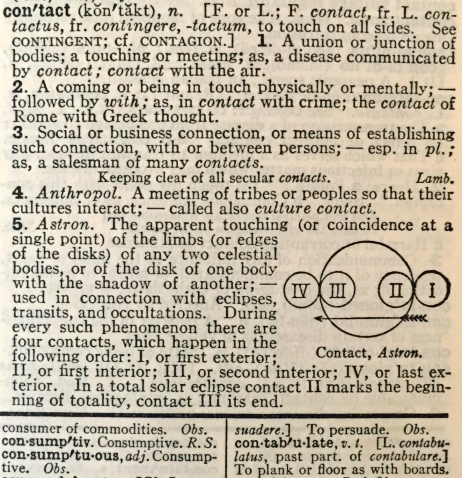 A lot to notice here: a strange and beautiful image that seems like it could be a tattoo on a mummified body that’s actually a clue in an ancient mystery leading to a portal to another dimension; the word “consumptuous” which I couldn’t bear to crop…consumptive=tubercular, and “consumptuous” sounds not like a synonym for that but more like the very sexy version, like “Nicole Kidman in ‘Moulin Rouge!‘ is just consumptuous!”; and finally, the etymology, which is indeed about touch, because of course: “tact-.” (And also related: contagion! Beware contact with the consumptuous, sexy though they may be).***

Thinking about the these connotations in terms of the stages of racial identity development, I’m going to just quote from Tatum’s book, where each is first introduced: “Transition to the encounter stage is typically precipitated by an event or series of events that force the young person [of color] to acknowledge the personal impact of racism. As the result of a new and heightened awareness of the significance of race, the individual begins to grapple with what it means to be a member of a group targeted by racism.” As compared to: “At the contact stage, the first step in the process, Whites pay little attention to the significance of their racial identity. As exemplified by the “I’m just normal!” comment [as a White woman tried to explain her ethnicity], individuals at this point of development rarely describe themselves as White. If they have lived, worked, or gone to school in predominantly White settings, they may simply think of themselves as being part of the racial norm and take this for granted without conscious consideration of their White privilege, the systematically conferred advantages they receive simply because they are White.” “Encounter” appears with “force,” “grapple” and “targeted”–living up to etymology. “Contact” appears with…not much that sounds like contact or touching at all, and maybe that’s the thing: we (white people) are “in contact” with people of color, but we don’t have to give it much thought, and are generally told not to bring it up, so we just don’t (until we do, and then: disintegration). To be sure: “pre-encounter” is posited as the first stage in identity development for a person of color (not “encounter”), so “encounter” and “contact” are not both the first posited step…but there is just something interesting to me about their similar connotations, different denotations and etymologies, and how they are used to describe these processes, and what extra insight I imagine I can thus wring out.

When I return, then, to the “encounter-tinker-choose-practice-contribute” sequence,  well…I get to do the opposite: decide that the etymology reveals nothing instead of everything (whee!), and so leave the fists out of my “encounter” doodle…and that, my friends, is what makes it therapeutic lexicography. 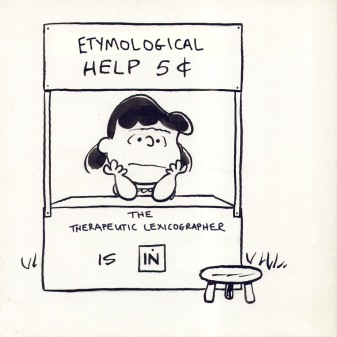 *Here’s an excerpt from the actual report: 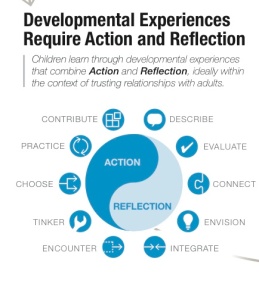 And the full report PDF which YOU SHOULD READ is here.

**And c) the connections to the way my Inner Journey-mates talk about human development; IJ-mates, we could talk about this, too.

***TB is real, active, and terrible, and my mother works on super-drug-resistant strains and I’m sorry for these awful jokes, Mom.