“Balm” started knocking at my consciousness on Christmas Eve; I was reading in the bathtub. Arlene Goldbard’s “A Culture of Possibility: Art, Artists, and the Future” is a beautiful book about the role of art and culture in public life, and it’s written in two parts: part one is divided into 28 mini-arguments for the public purpose of art, and part two is all its own piece, animated by the same ideas but presenting the thinking in a different way. I am reading one mini-argument a day, but I read the whole second part in one bath, and oh… I cried and cried with joy and recognition, and I thought: “this book is a balm.”

And since then I keep feeling that word about other things, and people, and then…well, then it was 75 degrees the whole last week of the year, so of course I kept thinking “balmy!”…and, as one does, imagining what connects those two words most deeply (hint: vinegar!)

Related to balm but a much less popular cousin is “salve.” Salve is a little too much like “ointment” for me and in the past I’ve tended to feel gross pronouncing it. But lately, I’ve been making more things out of my 1942 dictionary (the one I made my countertops from, not the 1934 one I keep on my dining room table) which is technically “unsalvageable;” that’s why the bookseller sold it to me for $1. And I think” “-salv-…” And a dear friend gave me a gift I’ll remember a long time: she said having lunch with me was “the salve she needed.” And then I know “sage” is botanically salvia… and suddenly I need to know all about all of this! You probably do, too.

So here we go: balm. Actually, let’s back into it…balmy:

So…I don’t know about you, but I tend to associate “balmy” with simply “warm.” And so does google! But it comes from healing and soothing…I wonder if at a key point in the word’s history we were mostly soothed and assuaged by warm days, so it came to mean that? Because for my favorite Bill, a chilly fall day would be much more refreshing and aromatic: “balm”-ier! Anyway: isn’t it beautiful?

So, balmy is “having the qualities of balm”; let’s check those out. 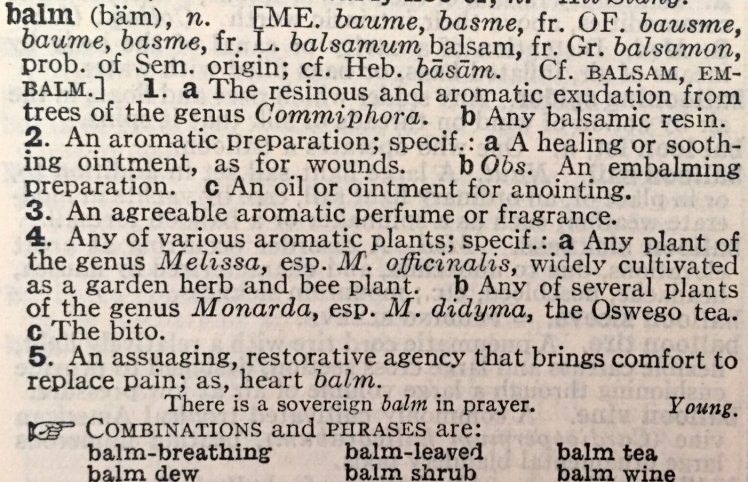 It’s from “balsam”! It all started with resinous aromatics, and came to mean “a lovely thing you slather on” and then even in 1934, “a lovely ‘thing’ you ‘slather on'” (i.e. as I experienced Arlene’s book as a lovely thing to slather on). Now: an interesting wrinkle here is “balsam.” Because:

Balsam is not one plant. Even “true balsam” is “any of several resinous substances.” So…dang! Did everyone already know this?! This is amazing to me: balsam is more like a category. And then there is ALSO definition 3: “anything that heals [etc].” Which…is that just backformed from “balm”? “Balsam” led to “balm” and then “balm” added back to “balsam”?* Based on all this I feel license to call anything I like “balsamic vinegar” at this point.

So, “balm” is fun to say and nice to know about. And now: some salv-ation. My main question going in is whether “salve” as a healing balm was named for the salvia plant we call “sage” or the other way round…

I bet you skimmed that, so let me synopsize and include modern etymology too: “salve” as we tend to use it comes most immediately from Old English sealf “healing ointment,” but also passed through a lot else on its way from Proto-Indo-European root *selp– “fat, butter.”  So…this actually has not a thing to do with Latin salvare (save) from salvus (safe/healthy), except in that weird Miltonian verb form we don’t use anymore. Also you used to be able to yell “Salve!” like “Hi there!” (again to do with salvus, “healthy/safe,” and salvo) though you had to give it two syllables (now, we’ll yell it however we want!)

So…that is all cuckoo, because I’d definitely figured “salve” and “salvage” would have something to do with each other (both bound up in saving and healing)… but “salvage” is definitely from salvare (via French salver) and “salve” just isn’t, so…it’s cuckoo.

Anyway: let’s get sagacious about how “salve” and “salvia” interrelate: 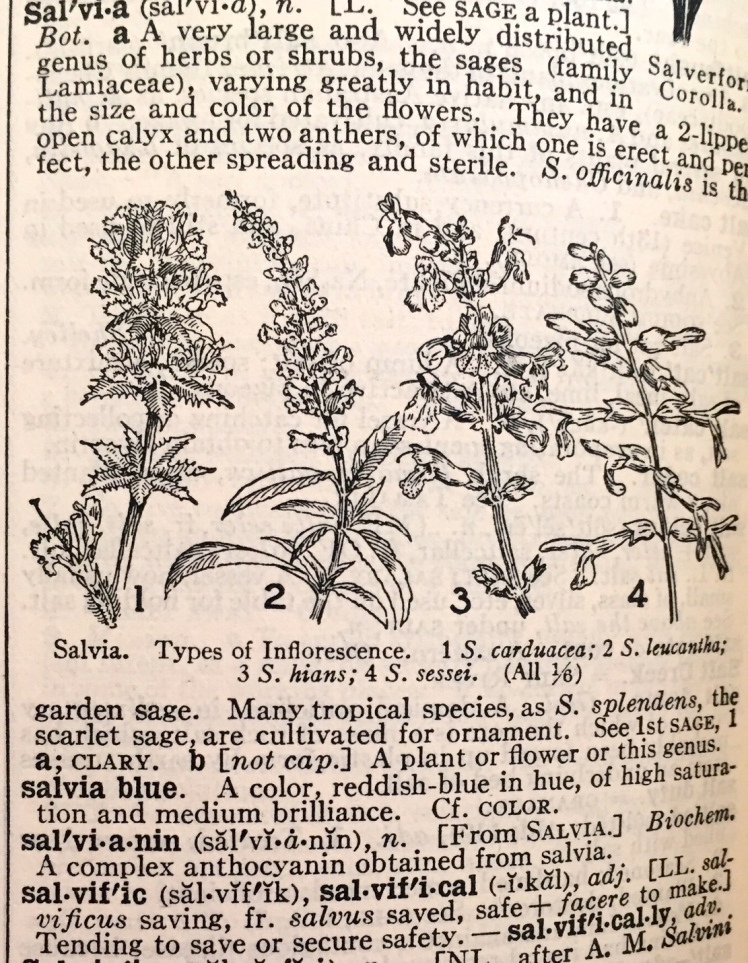 Not super helpful, but pretty, and check that crazy word “salvific”! So, on to “sage”: 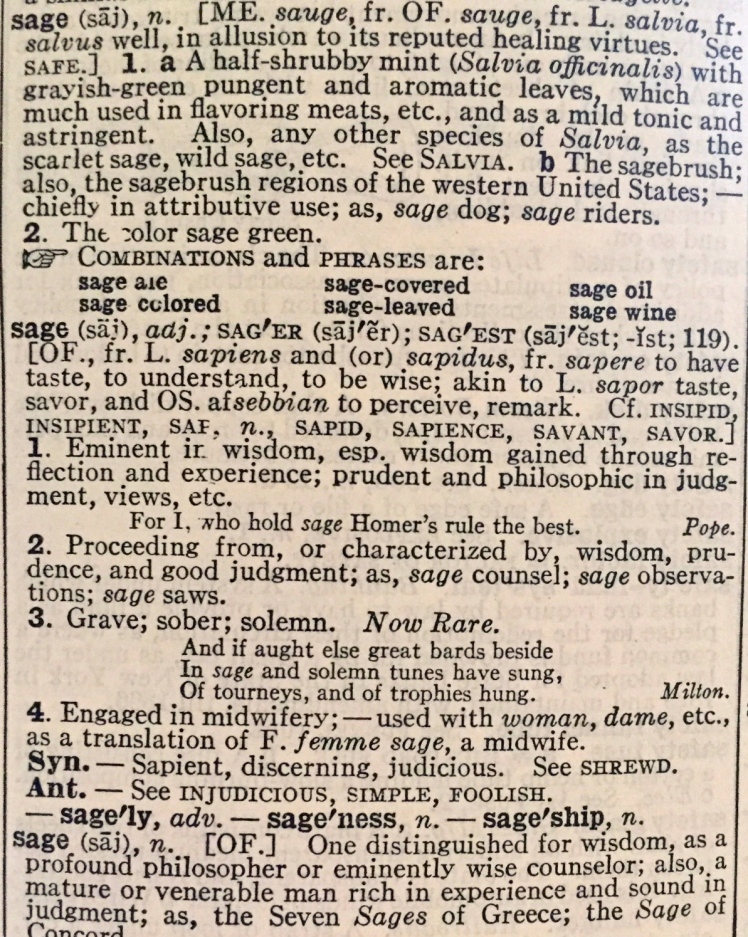 And, “sage” is connected to “salvage” via “salvia.” AND AND: “sage” (plant that’s good for you) and “sage” (wise person or thinking that’s good for you”) are NOT CONNECTED. They both come most recently from French: two different French words, one  (sauge) that goes back to L. salvia and salvus (so this is our healthy plant),  and one (sauge) that goes back to L. sapere (to be wise/have good taste) and then back back to Proto-Indo-European root *sap- “to taste” (so that’s our profound philosopher). More here if you need it.

So…wow. From all the words in those zillion entries, I am left with two favorite phrases: “a half-shrubby mint” (sage, def. 1) and “an assuaging, restorative agency” (balm, def.5). To me, these sing and dance around, and like all the words I end up writing about, they teach me something about how we can be on earth, with each other. “Healing” moves through all this too and is a word I keep noticing and being drawn to in the justice work of people I most respect, so here’s what I’m singing and dancing around about for 2016: may all we half-shrubby mints salve and salvage each other,  with all the assuaging, restorative, buttery agency we need for a balm-ass year.

*Ok you don’t have to read all these but you do need to know that there is basically an entire page of “balsam” in the dictionary.

One thought on “The Balm Dot Com/Salve Us From Ourselves”