Hey, so, we totally have a baby! 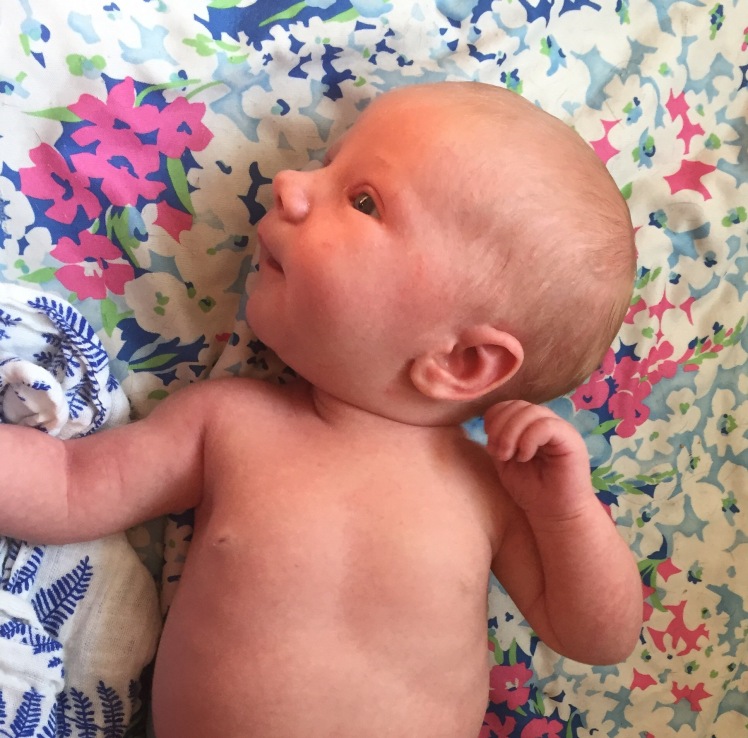 She’s an overwhelmingly delightful person. Her name is Sirenna Winchester Audre Norris*, and we call her Renn. I will not be posting frequent pictures on facebook, because it’s just not my way. I do TAKE like 1000 pictures a day, so what I am going to try and do is maintain a page on this site that I update frequently (maybe daily??) with new photos/videos. “Your Moment of Renn“–bookmark it if you are into this, come back and see us sometime. I won’t put the most nipple-centric pics on there but if you can’t handle the occasional nipple,  probably stay away.

Who knows how much lexploring I’ll be doing in the coming months, but I do plan to play with a few words that have been newly big parts of my life recently.

So to begin: UTERUS! Before pregnancy I thought about this word-as-a-word mostly in light of another word: at some point, the budding feminist learns that “uterus” is the source of the word “hysteria,” and that “hysterical” is only ever used to describe women, and that’s the stupid patriarchy for you. But I hadn’t thought a lot about “uterus” itself until mine was the focus of so very much attention from myself and others. 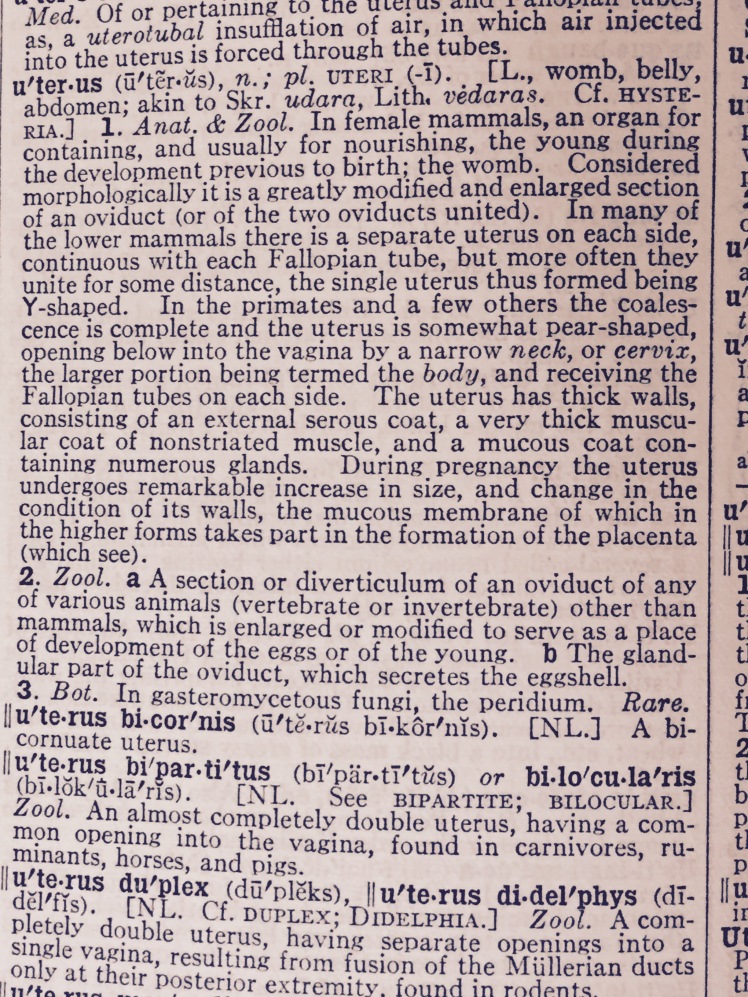 If you’ve read anything else on here that involves an entry in the 1934 Websters Int’l dictionary, you may note that this is astonishingly, uncharacteristically descriptive. It reads more like an encyclopedia! I can only think that’s because in 1934 it was still not ok at all to even say the word “pregnant,” and no one knew a thing about the inside of women’s bodies, and the lexicographers were like “we can offer the public some actual information, so why wouldn’t we?” Let us also note the phrase “uterus duplex” which sounds like a zine comic set in late 90s queer Seattle.

But there’s not enough etymology here for me. So to the other OED… 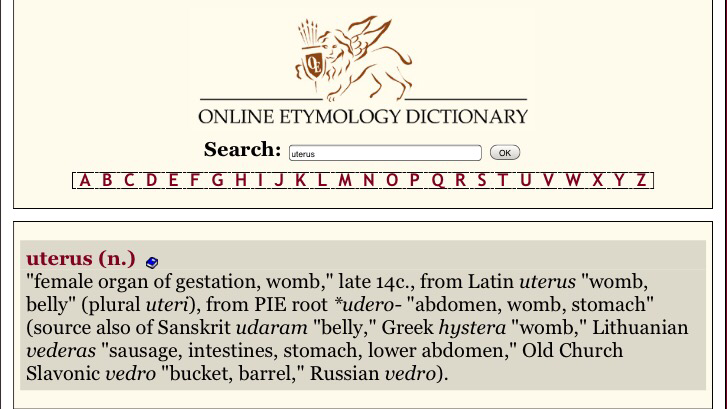 …which has basically the same nuggets but with a PIE root involved, which is all I ever want. It is funny to me that this long ago connection to “stomach” results in “uterus” and “sausage” sharing a history, but beyond that this is pleasantly non-controversial (the bullshit being saved I guess for “hysteria”).

My personal uterus was a complete champ, BTW. So much so that after having experienced pregnancy and childbirth,  I now have a pet theory about the origins of aforementioned patriarchy: that once humans/humanoids developed something like an ego (here meaning just a conscious sense of oneself in relation to others such that a sense of worth could be contingent on that relationship, which I don’t assume was present from jump), the extreme insane powerful awesomeness of women as manifest through childbirth was psychologically intolerable for men, so they made up a bunch of crap about how their characteristic attributes are what’s actually super. I didn’t buy that crap before, but I find it absolutely tragically pathetically hilarious after doing what I just did. Like,  “sure, dudes. Big shoulders and the ability to get really mad really fast and act without thinking, that’s very special, and the ability to gestate, birth, and sustain human life makes us very weak indeed.” (Note: I don’t think these powers are what define women, just that they are among what is amazing about women and are what freak some men out.) I hope we can help Renn to reject that fuckery as well, and to be as formidable as Ashley Ford (a writer I recommend) coming to the defense of Roxane Gay (a writer I recommend beyond almost any other) on Twitter the other day: (I’m not quoting the guy she’s addressing because fuck him)

Along with “do no harm, take no shit,” “don’t hold back, queen” is about exactly what I hope we impart to our Renn as she becomes herself. The title of this post is a joke but also true; I did just meet “us,” as in the unit that is her and me and Bill, and I am so excited to see how we all turn out.

Winchester: because it’s my middle name, because I’m named after a great++ grandfather from Tennessee who fought for the Union. This doesn’t hurt either (we are related, though I wasn’t named for her!)

Audre: Lorde. It’s pronounced Audrey, and she was named that by her parents. She changed it because of how much better it looks with Lorde to have that final e.