Usually in weeks where the news is this terrible, I don’t want to write, unless it is about that terrible news. I think this is because to write about some word I think is neat seems disrespectful , particularly to those most directly affected by the catastrophe. This week, though, there is so much terrible news that I know I couldn’t write about it all if I tried, so I feel weirdly released to go ahead and write about my own daughter’s name. But still let it be said: fuck you Arpaio, Harvey, Gorka, Pmurt, my friend’s cancer, the cops in Charlottesville, and god save the rest of us.

So: Sirenna. I’ve shared this reference here already, and indeed, the French sirène and Spanish sirena (both meaning “mermaid”) are the main source material for the name and pronunciation, with a dash of English orthography added in hopes of saving her from a lifetime of SerEEna, though we may be kidding ourselves. But of course French and Spanish got [siren] from somewhere.

They got it from Latin, and…they totally messed it up. Or it may have been Latin who messed up–I can’t tell from the etymology I can find. But Latin “siren” came from Greek Seiren, as in one of the Seirenes, and the Seirenes were half-women half-something, but that something was NOT.A.FISH.

Half…BIRDS*! I mean here it looks more like 85% bird, but we get the idea. Mermaids are actually closer to nereids–sea nymphs–and their thing was just being hot af, not singing so beautifully and wisely that no one could resist.** Over time, the two female dangers-to-sailors got conflated (“WHO CAN KEEP THESE STRAIGHT?!” I imagine frightened sailors fuming) into one tidy danger, preserving the singing but ditching the wings (see definition 2 above). Psychologically I can see how this would happen–what’s more knee-jerkily nautical, a bird (even a sea bird) or a fish? No contest.  (More on this conflation here).

And since then, much of what takes its name from “siren” is referencing that half-fishhood falsehood. 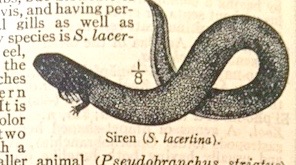 Not everything is fish-ish; obviously there are sirens on top of cars that make a lot of noise, and “sirenic[al]” which seems in urgent need of resurgence.

Now may be an appropriate time to address a natural reader question: “leaving aside the mermaid thing which is very cute but now I know is wrong, why would you name your daughter after lying half-bird sailor-murderers?”

Well: I mean, I’m not especially here for treating aspects of femininity (in this case, as Greeks saw it) as metaphorically deadly to men. Like, women who use their voices powerfully are going to kill a guy? “They sit in a green field and warble him to death with the sweetness of their song. There is a great heap of dead men’s bones lying all around, with the flesh still rotting off them”?! Fuck off! It is sociologically interesting that these characters arose but that doesn’t mean they correspond to an actual “type of woman.”  Whatever her name, we would need to teach our daughter this: some men are scared of the ways women are more powerful than them, so they make up stories, but no one has to believe them, including men.

Here’s what Sirens do in the actual Odyssey: “‘Come here,’ they sang, ‘renowned Ulysses, honor to the Achaean name, and listen to our two voices.*** No one ever sailed past us without staying to hear the enchanting sweetness of our song- and he who listens will go on his way not only charmed, but wiser, for we know all the ills that the gods laid upon the Argives and Trojans before Troy, and can tell you everything that is going to happen over the whole world.’ (you can read all of Book XII here)

So, the implication: Dudes beware! If a woman sounds good and seems to know more than you, your bones are going to end up on the pile that surrounds her! Ok, Homer (et al). Fuck right off.

So, yes, I am about reclaiming “siren.” As always when reclaiming, I find it useful to go a little further back into the etymology. As in…whence Seirenes?

1934 doesn’t know, but the Online Etymology Dictionary has a guess: “also in Greek ‘a deceitful woman,’ perhaps literally ‘binder, entangler,’ from seira ‘cord, rope.’ This “binding” thing is clearly related to “siren” being pejorative; the idea that some women are so problematically irresistible that men cannot be considered responsible for what they do, including what they do to them, has always helped men excuse their violence. Still there’s something in seira I like; being bound to someone isn’t bad unless you didn’t choose it. May we give men more credit than Homer and assume them capable of choosing to whom they are bound. And what binds women to each other is at least as interesting as what lures sailors off their boats, so let’s throw into our reclaimed “siren” something about being as delightful to women as to men.

While we’re at it, we can use all this to fix “sirenical” too: “melodious, fascinating, deceptive” is cancelled… I vote “wise, equally charming to women and men, and able to fly right over your head.”

*These aren’t the only half-women, half-birds in mythology, of course. The acronymically-minded observer may have already noted this:

…and mmm hmm it’s totally on purpose. And GUESS WHAT? There’s a half-woman half-swan out there. The kinnaree/kinnari, in Thai mythology! We got her a little statue.

**This actually made me go WHOA out loud, and I hardly even know what to do with it. 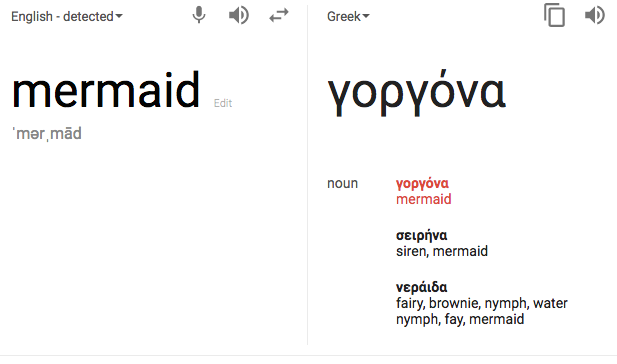 I’d thought, “huh, I should see what google would say Greek for mermaid is nowadays.” The first thing that comes up, and not being a speaker of modern Greek I do not know if this is legit the go-to word, is…well you can see what it is,”γοργόνα,” but you may not be able to tell it’s pronounced “gorgona.” Like…gorgon… like Medusa?! The next one down is pronounced “sirena.” And the third, “neireida,” So…this conflates not just sirens and neireids, but also gorgons?! I MEAN. I had not thought of gorgons as sailor-dangers, but there is this: “Homer spoke of a single Gorgon—a monster of the underworld. The later Greek poet Hesiod increased the number of Gorgons to three—Stheno (the Mighty), Euryale (the Far Springer), and Medusa (the Queen)—and made them the daughters of the sea god Phorcys and of his sister-wife Ceto.” Also: they had wings! So, kind of sea-y, kind of bird-y. Like an average of nereids and Seirenes, so sure, Greek, they get to be mermaids too. A crazy thing is that last summer I started thinking really hard about Medusa in particular, about how I wanted to reclaim her, but had no notion of connection to sirens, mermaids, etc. What a world!

***there’s some classical-poet debate about how many Seirenes there are, who parented them, if they have names, and what those names are. Parthenope is named in the 1934 Webster’s entry too; normally I like to stick to “don’t laugh at names from other languages/cultures” but the entry for “Parthenon” in my head is so strong and Parthenope sounds like some snarky-but-goofy teen’s refusal to leave the Athens hotel.