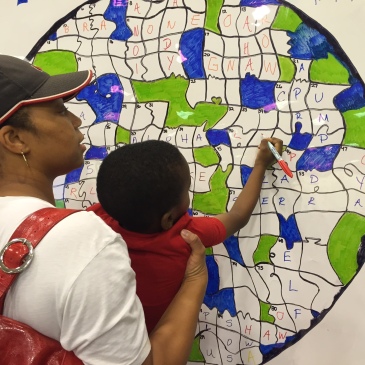 This is where photos of selected Participatory Democrossy events live. Click on small photos, and they become big!

They were skeptical of their clue-writing abilities, but I was not. Solve their puzzle here. 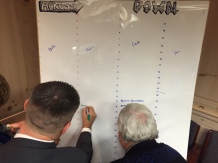 This was so joyful! I love facilitating at BN Edgewood because it seems like 90% of the passersby I manage to invite or cajole into participation are supergeniuses in one way or another…mathematicians, musicians, socialist revolutionaries, spoken word artists, programmers. All appear below. Solve their puzzle here. 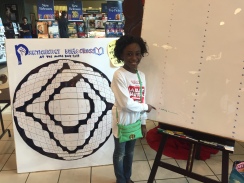 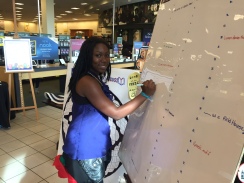 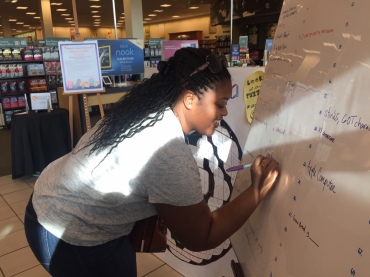 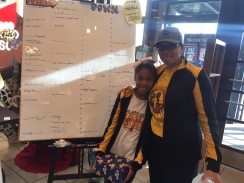 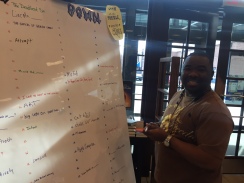 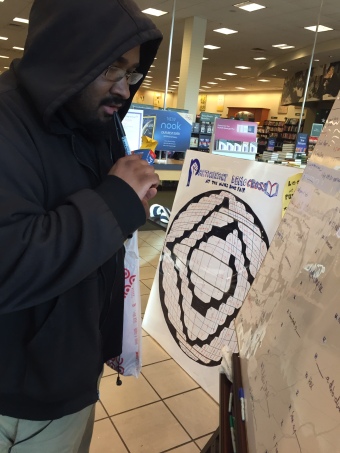 A musician draws the clue for “notes”

Spoken-word artist Verb writes one of the cleverest clues 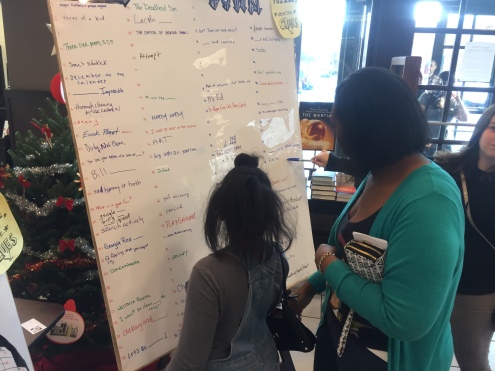 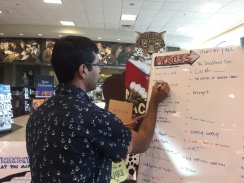 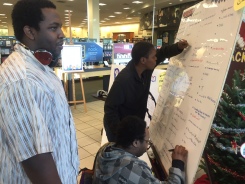 My colleague Jean-Jacques was first to start solving 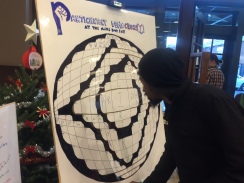 This group of 3 got about half the puzzle!

The Library brought Participatory Democrossy in as a brain break for students in the throes of finals week, and wow: this gave me life and then some. These students wrote some intense, clever, subversive clues, and were just so delightful to be with. I hope they all pass everything! Solve their puzzle here. 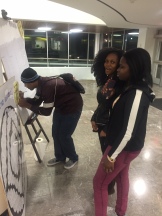 One of the clue-heroes of the night 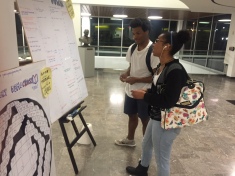 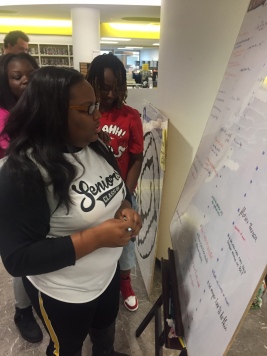 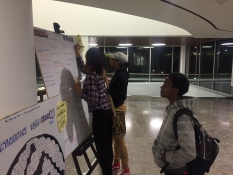 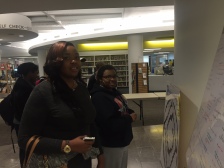 The Board is full and we switch to solving 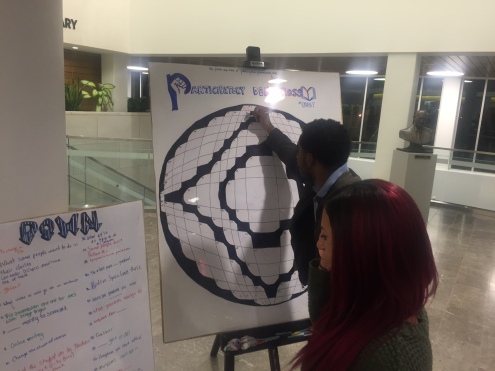 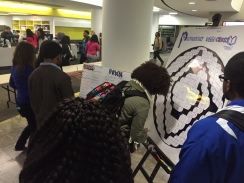 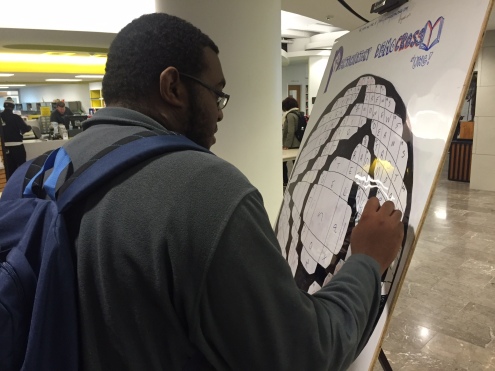 Wow: people at a used bookstore are SO FUN to do this with. Note: this event featured way more people I actually know, and consequently I did a less thorough job of capturing photos.

Ok: I LOVED doing this at a bookstore. You don’t need to love crosswords, you just need to love words, and the love wordlove of these folks knew no bounds.

Here’s the clue board, to solve at home: 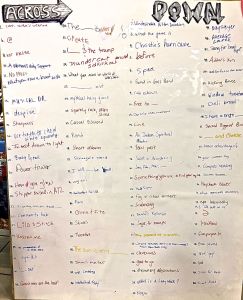 And you can also solve online: http://crossword.info/democruciverbalist/minimade

This was in Piedmont park, on a warm fall day, and one thing I particularly enjoyed was that a few people were SO INTO IT and wrote tons of clues each…several of those democruciverbalists are pictured below.

And here begins the series of the kickass group who came together and solved it collaboratively. This might be my favorite part of doing this. The people don’t know each other, and they come and act as one brain and it’s SO RAD.

This one took a lot more facilitating, so there are a lot few pictures, but DANG it was so rad. You’ll notice that this time, instead of writing directly on the clue board, I had folks write on little strips which we taped up. This was so multiple people could easily clue the same word…the idea being that if you are imagining the future you want to live in, you probably have an emotional attachment to some concept or another, and I didn’t want to mess with that. 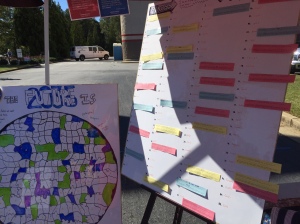 Ready to solve the Puzzle from the Future? Click here.

Oh, good people: this past week-.5 was cuckoo in my land, because I was in like 3 states doing all kinds of things that were very meaningful to me (see here and here), right up until the very moment that I suddenly had a booth at the Atlanta Maker Faire, having never been to a Faire, much less to do the thing I was there to do (which I advertised as this). And in the end, it was some of the most damn fun I have ever ever had, AND, you can have some too, because it resulted in crossword puzzles you can do! They are at the end of this big ol post.

So here’s what happened: I designed a puzzle just for the event, and we started the day with the grid filled in and the clue board empty, like this:  (note: throughout, many photos are tiny here but will show you big versions if you click them)

And then people wandered up and filled in clues for the words…like this:

…and this guy wrote in the very last one: 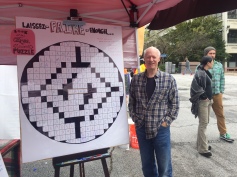 And then I erased the grid, flipped the boards, and new people wrote new clues…

…until the clue board was full, so I erased the grid, and flipped the boards, and The People solved the clues The People had written!

And so I erased the clues, flipped the boards, and it was iteration three! We are on Sunday by this point.

…and when the clues were done, I erased the grid, flipped the boards, and…it was like 4:30, with only a half an hour left in the whole Maker shebang. A few individuals got it started…

And over the course of the final 20 minutes, a group of five drifted up, and just COMMITTED–strangers to each other, though there was a pair of friends, and a dad and son–and they just KILLED IT. They all had markers, and they finished each other’s sentences, and they tore through the puzzle as though with one brain, and they made each other laugh, and watching and listening to them work and solve the clues of 50 strangers who’d passed by earlier was just…rapturous.

Also in my booth,  another puzzle was getting collaboratively clued…and you can solve that one right here. 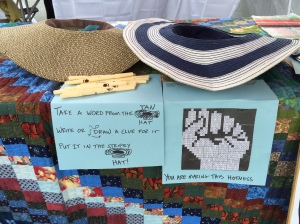 Ok, so this was just all really beyond my wildest expectations of fun. AND: now you can use the clues written by everyone and do the circle puzzle yourself! There are three sets: use one or all or whatever you like. Use images below, or on this google doc.

I will be doing something similar in Carrollton on October 18th: We’ll be collaboratively making a Crossword Puzzle from the Future We Wish to Inhabit–part of #DareToImagine from the US Dept of Arts and Culture, and I’ll be doing it at the Tour de Carroll bike ride (put on by West Georgia Cycling, Carrollton’s by-far-best-and-friendliest bike shop.) Y’all come!